There is a word that has entered the lexicon called 'fisking', as in I fisk, you fisk, oh would that they had not fisked etc. It is defined thus:

[blogosphere; very common] A point-by-point refutation of a blog entry or (especially) news story. A really stylish fisking is witty, logical, sarcastic and ruthlessly factual; flaming or handwaving is considered poor form. Named after Robert Fisk, a British journalist who was a frequent (and deserving) early target of such treatment.

Now, said Robert Fisk has again demonstrated why his name is doomed to be a pub quiz question a century hence. In an article in today's Independent he spouts all of the tired garbage of the 9/11 'Truth' industry, and even parrots their line that all he is doing is asking questions.

where are the aircraft parts (engines, etc) from the attack on the Pentagon?

All over the impact site as evidenced by many photographs and eye-witnesses.

Why have the officials involved in the United 93 flight (which crashed in Pennsylvania) been muzzled?

They haven't, but they are a little tired of being badgered by nutcases and their words being taken out of context.

Why did flight 93's debris spread over miles when it was supposed to have crashed in one piece in a field?

It didn't, this was a map reading error where idiots have confused a straight line distance from the road distance, which involves driving around a lake.

If it is true, for example, that kerosene burns at 820C under optimum conditions, how come the steel beams of the twin towers – whose melting point is supposed to be about 1,480C – would snap through at the same time?

Because steel loses structural strength as the temperature increases, that is why blacksmiths heat steel before working it. Also, when buildings collapse then they tend to collapse abruptly not in slow motion. The only people who have claimed that the steel beams would have had to have melted are people like, well, Fisk. The engineers who have looked at the problem have determined that the steel supports in the World Trade Centre certainly got hot enough to lose enough strength to fail.

They didn't (NIST estimates 15 to 25 seconds but it is difficult to be precise because of the dust and the fact that many of the cameramen in the best positions to observe were running for their lives).

What about the third tower – the so-called World Trade Centre Building 7 (or the Salmon Brothers Building) – which collapsed in 6.6 seconds in its own footprint at 5.20pm on 11 September? Why did it so neatly fall to the ground when no aircraft had hit it?

What could possibly have struck WTC 7 to damage it enough so that it eventually collapsed? Well, here is a clue: 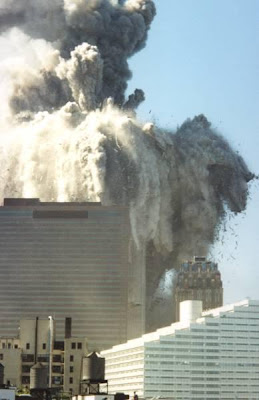 Building 7 is tall one that is being showered with debris. Having a quarter-mile high building collapsing nearby can be a bit of an issue, and the FDNY pulled all of their men away before the final collapse of building 7 because it was on fire and so badly damaged that they didn't think that it would survive, and they were right. Many of the other buildings surrounding the two World Trade Centre towers were also effectively destroyed by falling debris, but funnily enough we never hear about them from the 'Truth' industry.

Fisk is a joke, and also the main reason why I stopped reading the Independent. I remember the article that finally finished me off. It was on the eve of the Gulf War of 1991, where he was predicting that the allied offensive would be a fiasco on the basis that a truck convoy that he was riding with had got lost. As everyone now knows the allied offensive was actually so successful and one-sided that it was called off after 48 hours because it was less war and more massacre. Funnily enough he said much the same about the US attack on Baghdad in 2003, which was equally successful. In fact, embracing 9/11 'Truth' represents an entirely consistent standard of journalism for Mr. R. Fisk.
Posted by Steve Horgan at 4:30:00 pm

no, you're the joke

The official story is highly unlikely. Why haven't they shown us video footage of the pentagon?