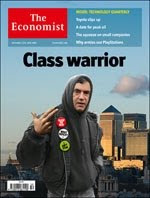 The Economist has a very good analysis of Gordon Brown's attempts to split the nation by class in the hope of hoovering up a few votes. The full article is here, and this gives a flavour of it:

But—even leaving aside the inconveniently privileged upbringing of some members of the Labour cabinet, and the open question whether Eton and Oxford is a weirder background than a Scottish manse and a lifetime in Labour politics—Mr Brown’s salvo risks backfiring. It is negative and retrograde; it makes him look distracted by antiquated obsessions. Eton gibes might just work as knockabout humour; but Mr Brown doesn’t seem to be joking.

It also makes another important point, that class division can run in many directions. One you decide that Britain as One Nation is no longer government policy then what's to stop the upper and middle classes taking against the poor?

Britain has seen that kind of downward hostility before, in the 1980s, for example. Those at the top end of the scale become cross about their tax burden, and doubtful of the value of state services (which they often don’t use much anyway). They start to think of the poor as scroungers and cheats; good works are abandoned; the social contract frays.

Gordon Brown doesn't care about this of course. There is nothing about the man that suggests he thinks in the long term. Everything is tactical and for his short-term advantage. If he trashes our economy and our society, well, that is secondary to keeping G. Brown and his cronies in the rather good situation they currently find themselves. I firmly believe that one of historical questions generated by the first decade of the 21st century is how a man of with such a demonstrable lack of character or ability managed to become our Prime Minister.
Posted by Steve Horgan at 7:25:00 pm 0 comments

Basildon Council doing well according to the Audit Commission

The Audit Commission has rated Basildon District Council as doing well, scoring 3 out of 4 under the Comprehensive Area Assessment process. This is obviously very good news, and reflects very great credit on our officer team, including our excellent Chief Executive Bala Mahandren. It also says very good things about the Conservative stewardship of the Council, and the Audit Commission specifically picked out leadership as one of the Council's strengths. This was all announced at the Council cabinet meeting on Thursday, where there was an interesting debate. The Labour leader took the line that 'this is all very well but...' and went on to make the point that the Council doesn't get everything right. Of course it doesn't. We know that and there was nothing that even looked like complacency from the administration. It is nice to be told you are doing a good job, but that is not was drives me and my colleagues. We want to do the best job for the people of Basildon District and we are acutely aware where we fall short. So, thanks Audit Commission, but we won't be resting on our laurels.
Posted by Steve Horgan at 7:08:00 pm 0 comments

You hold political power in trust, at least in a democracy. You are supposed to use it to advance the interests of the electorate while you have it and then pass it on in the best condition possible to the next incumbent. That is unless you are Gordon Brown, who is cynically using what will probably be his last days in power to shore up the Labour party and lay traps for any incoming Conservative government. That he is wrecking the economy so that it will take a generation to fix seems to interest him not. That the media almost to a man have seen through his grinning façade doesn't seem to bother him either. At least the answer to the future pub quiz question 'who was Britain's worst Prime Minister' is clear.

It seems that Alastair Darling tried at least to start addressing Britain's crippling budget deficit, but Brown and his acolyte Balls put him back into his box. Maybe he's going for 'who was Britain's worst Chancellor?'.
Posted by Steve Horgan at 7:03:00 pm 0 comments

You have to wonder if the Labour leadership get out much. Class war is a dead issue, among real people that is. No-one, at least almost no-one, particularly cares about someone's parents, at least not to the point of evaluating their worth as a human being. Labour haven't really cottoned on to this, however, at least not their cocooned, desperate leadership. Their idea is to try to brand the Conservative leadership as 'toffs from Eton' in the hope that people won't vote for them on that basis. Well:
It is also a window into the deep contempt that the Labour party feels for their own core vote and the British people as a while. Basically, they expect that voters are so stupid and so small minded that they will respond to a vicious characterisation of the Conservatives over any other issue come election time.

I have news for them. Our people are better than that.
Posted by Steve Horgan at 5:14:00 pm 1 comments