One thing of especial interest did come up at full Council on 21st May. With all the furore about MP's expenses, one of my colleagues posed a question to the Leader about Councillor's expenses. Specifically, Cllr. Carole Morris asked if Councillor's expense claims could be published monthly on Basildon Council's website. Since I am the Councillor with the responsibility for IT, this has been delegated to me and I propose to get it done as soon as possible. I don't think that we have got a problem with expenses at Basildon, but this is public money and the public deserve transparency on how it is spent.

I cannot imagine that there will be much argument over that.
Posted by Steve Horgan at 11:35:00 pm 0 comments

These is the new Cabinet for Basildon District Council: 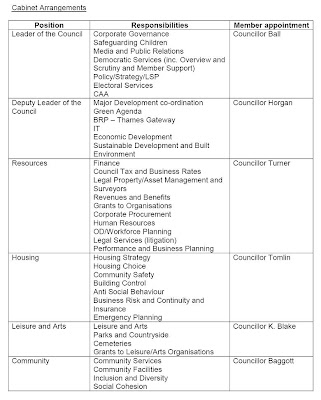 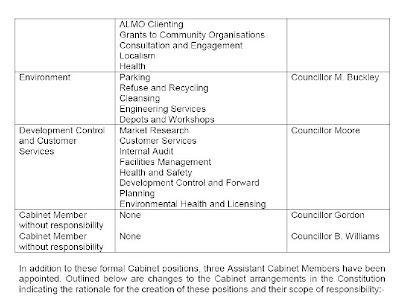 Councillor Gordon is leader of the Labour Group and Councillor Williams in the nominee from the Liberal Democrats as we run a mixed Cabinet. There is some discussion about the other parties giving up their Cabinet positions in return for Chairmanship of the various scrutiny functions, but this has to be considered in light of yet more government legislation on the operation of local government. We want to see how this affects the Council decision-making processes before we make any changes.
Posted by Steve Horgan at 11:24:00 am 0 comments

Brown - no election cos' I'd lose

Prime Minister's Questions were extraordinary today. David Cameron asked for an election and Brown said no because it would cause 'chaos'. When pressed he clarified that to mean that a Conservative victory would cause chaos. So there you have it. We won't have the election that the country is demanding because Gordon Brown would lose. Politically, this is a bit of a clanger as Gordon Brown will now be accused of 'bottling', again. It also runs counter to press editorials and campaigns for an immediate election in the aftermath of the expenses scandal and the papers won't like that at all. There were numerous better ways to handle David Cameron's question, but Brown unerringly found the worst response. He will rue that in the days to come.

Even Nick Robinson twigged what a mess Brown had made of things.
Posted by Steve Horgan at 8:37:00 pm 1 comments

Conservative Election Broadcast, on expenses instead

In case you missed it, this is why the Conservatives are doing better in political terms than Labour over the expenses scandal.

It's called leadership Gordon.
Posted by Steve Horgan at 12:50:00 am 0 comments

Mail on Sunday has Labour on 20%

The expenses scandal has hit support for the major parties, but it is now clear which has been hit the hardest. The Mail on Sunday will have a poll today, I am writing this very early on Sunday morning, that puts Labour support on 20%, with the Conservatives on 42%. It is clear that the contrast between David Cameron's decisive leadership and Gordon Brown's vanishing act has not been lost on the electorate.

Brown has form on this. Again and again when Tony Blair was Prime Minister, Brown would go and hide away when the political going got tough. That might have been all right when Blair was there to handle the difficult stuff, but he is gone now, Brown saw to that. Now that Brown has the top job he has to lead because that is actually the what the top job is. Instead he has hidden himself away and so Labour are plumbing new historic lows in terms of support. At 20% pledging to vote Labour, the lowest since modern polling began in 1943, we are in uncharted political territory. Certainly if that was carried over into a general election Labour would probably cease to exist in its current form. At the very least the June 4th elections look like being a total disaster for Labour.

Meanwhile, the search for Gordon Brown continues.
Posted by Steve Horgan at 12:23:00 am 0 comments