I know that you have to deal with unsavoury characters as PM, but Labour had a policy of positively cosying up to Gaddafi. Given current events Brown is probably hoping that photographic evidence of contacts with the genocidal dictator won't emerge. 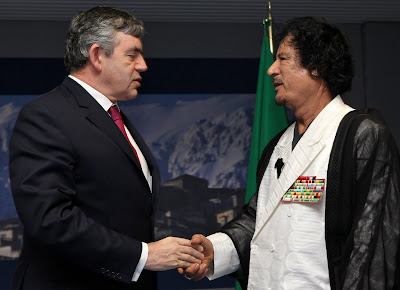 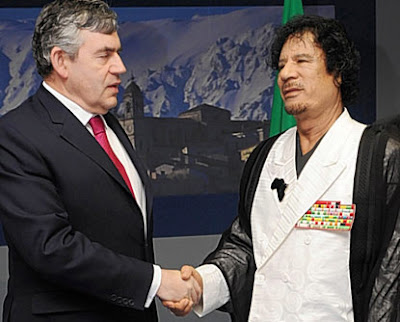 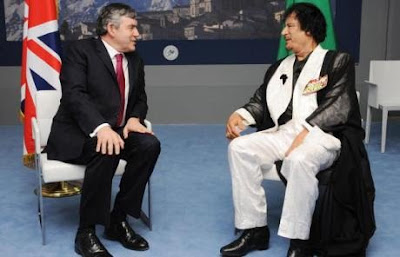 Why Libya and not Burma?

Why Egypt, Tunisia and Libya and not Burma or North Korea? There is one factor that marks out the last two that is not present in the first three; the status and role of the army. In Burma and North Korea the army is integral to the State. Burma is run by the army. The leaders of North Korea hold rank in the army and the senior generals sit on the highest committees in the land. For the Arab countries the army is separate from the ruling party, and is a distinct and separate institution. In Egypt and Tunisia the armies are relatively powerful and designed to fulfil their role of protecting the country. In Libya, the army is relatively weak and not trusted by the ruling elite. This explains the Chadian mercenary units, the hiring of mercenaries being a classic tactic of rulers who doubt the loyalty of their own forces.

What this all means is the answer to this simple question: will the army fire on its own people? In the case of Burma and North Korea, no-one really doubts the answer. Both states have histories of using their armies for brutal internal repression. In the Arab countries the answer is no, and that is the basic reason why Hosni Mubarak and Zine El Abidine Ben Ali are now in need of alternative employment. In Libya the answer also appears to be no, but Gaddafi's use of mercenaries has changed the dynamic. If you meet a peaceful demonstration with live heavy weapons fire from a bunch of foreigners then you had better think things through. Predictably, the Libyan army wasn't going to sit still while hired Chadians murdered their brothers and sisters. There is now a state of civil war in the country.

Of the many options open to him when the protests began it is actually possible that Gaddafi chose the worst, for both his country and for himself. By going with the Ceaușescu strategy there is a real chance that this will end with him and his family being put up against a wall and shot.

I suspect that there won't be too many tears if that happens.
Posted by Steve Horgan at 8:29:00 pm 0 comments

I am a West Ham fan. I am also a football fan, in that I will watch any decent team because I just like to see the game played well. Last night I didn't have to stray from my favourite team though because the boys in claret and blue were playing Burnley in the FA Cup. As anyone who follows that competition knows, West Ham won 5-1. What was even more satisfying was that the TV cameras picked out lifelong Burnley fan Alastair Campbell in the crowd looking a little sad.

Campbell is the former Director of Communications and Strategy to Tony Blair. He was also the man who debased British politics with a culture of lies, including the web of deception that fooled the Commons into voting for the Iraq war. His poison extended to the last election, where he tried to spin the line that Labour hadn't actually lost in an effort to keep Gordon Brown in power.

God knows what he is doing now, maybe lying to himself in the mirror of a morning just to keep in practice.
Posted by Steve Horgan at 8:58:00 am 0 comments

Have you been wondering why so few Labour talking heads appear in the media? Certainly, their absence is very noticeable. We often get government ministers on Sky or the BBC without any response from their supposed shadows, and media items actually originating with a Labour figure, with the exception of Ed Miliband, are non-existent. Well, the Mail has the answer. Apparently, if you are a Labour shadow minister who wants to do any kind of media you have to fill in a form and get it approved by the Leader's office first. No, I am not making this up.

For those of you who haven't dealt with broadcast journalists what you tend to get is a phone call asking you to appear on their radio or TV programme at a particular slot and usually at quite short notice. Picture the scene: call to Labour Shadow Minister at 07:00, "hello can you do a slot at 09:00 to reply to William Hague on the situation in Libya"? Response, "er, OK", frantic search for form, furious scribble, desperate delivery to designated person outside of office hours, doesn't get returned in time and, "Sky Newsroom? Really sorry but I can't make it this morning, something desperately important has come up...". So, William Hague gets a clear run because no-one makes him fill in any kind of a form and the Labour party manages to drop the ball yet again.

The only thing that surprises me is that the Shadow Cabinet did not collectively tell Ed to shove off.
Posted by Steve Horgan at 12:14:00 pm 0 comments

The government's latest issue with Local Authorities is non-jobs. These, of course, are local government jobs that most people add limited value to, well, anything. The best examples of these are from our old friends at Manchester City Council, the same people who seem to enjoy cutting their own services because they get to blame the government about it, with the following:

These roles are clearly bonkers, but sometimes Local Government is its own worst enemy. Jobs are advertised with descriptions in Council-speak so that they are incomprehensible to human beings. There is also the depressing tendency to try and reflect every aspect of a job in the job title, which leads to a title that is several sentences of gibberish long.

Eric Pickles does have a point though. Earlier this week I was told that Basildon Borough Council had been criticised because we do not employ a Tourism Officer. Now, I love this area, and I would be first to sing its numerous virtues to an outsider, but a Tourism Officer? I don't think so. Apparently though we are the only Council in Essex without one.