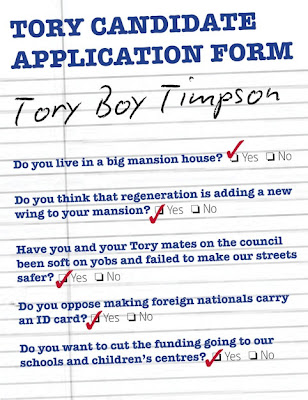 I lifted this from Guido, but it is so appalling that I couldn't but comment. The first two points are sheer class war. This leaflet has apparently gone out in the poorer parts of Crewe and what they are trying to sell to the worst off there is the idea that if someone is economically successful then they cannot be in politics. Of course it won't go out in Crewe's richer areas and this is from a party whose former leader has just bought a £3.5 million house. Labour don't really believe this stuff any more, but they think it will appeal to the narrow prejudice of a segment of the electorate and so they are happy to run with it. This is simply dishonest.

The next point is an interesting counterpoint to Labour's claims that crime is falling. Unless there is some particular crime wave in Crewe fuelled by specific local incompetence then they are again not saying what they believe and trying to convince that public safety has nothing to do with the Labour government. This is simply dishonest.

Then comes the direct lift from the BNP's approach to political campaigning. The 'foreign nationals' thing is a direct appeal to xenophobia, and of course they don't mention that everyone gets an ID card under Labour, not just foreigners. This is not just dishonest, this is reprehensible. Labour, the master non-racists, unless it increases their chances of winning a by-election when they are happy to take lessons from Nick Griffin.

The last point is just a flat-out lie. There is no Conservative policy to cut funding for schools and children's centres.

So, there we have it, vote Labour for lies and racism. No doubt this is what Gordon Brown calls listening and leading.
Posted by Steve Horgan at 12:41:00 pm